Here we offer a true replica of the cavalry sword designed in 1908.

The 1908 Pattern Cavalry Trooper's Sword (and the 1912 Pattern, the equivalent for officers) was the last service sword issued to the cavalry of the British Army. It is widely considered the most effective cavalry sword ever designed, although ironically its introduction occurred as swords finally became obsolete as military weapons. With the introduction of the 1908 sword, however, the era of the compromise design was over. The 1908 sword was purely optimized for thrusting. The skewer-like blade had a thick "T" cross-section, much narrower but thicker than a traditional blade design making it far stiffer in the ?weak? axis for a given weight so as to resist buckling in the thrust. The blade ended in a sharp "spear" point. The large, sheet steel bowl guard gave considerable protection to the hand. The rounded rectangular section chequered grip was of a semi-pistol configuration. Although not as extreme as modern fencing pistol or orthopedic grips, this design caused the blade to naturally align with the arm when the arm was extended, in position for a charge using the point. A thumb stop was indented on top of the grip, just behind the guard. The large pommel helped to keep the point of balance of the sword close to the guard, balancing the sword for its length. 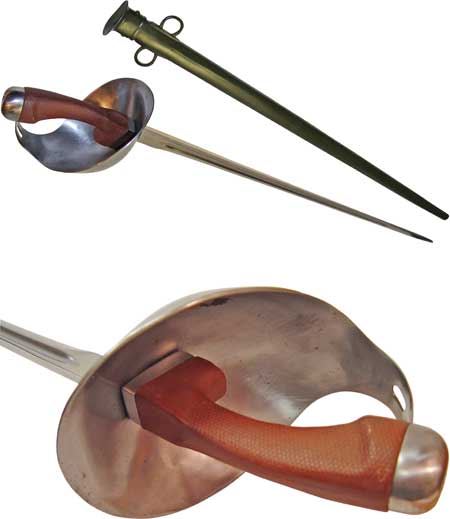